At the start of 2017, Qvisten Animation's new project was in danger of running aground. With just six months until deadline, less than 1% of Anchors Up, its nautical-themed CG feature, had been rendered. Even running day and night, its 40-node in-house farm simply wasn't large enough to complete the job on time. To avoid disaster, Qvisten turned to the cloud – and to Qube!, PipelineFX's intelligent render farm manager. Thanks to Qube!'s ability to route jobs to Microsoft Azure, Qvisten was able to keep its head above its lovingly rendered water, and complete the job on schedule.

Anchors Up: a complete feature-length animation created in under a year

Qvisten Animation is no stranger to tight deadlines. Since its foundation in 1994, the Oslo-based studio estimates that it has averaged at least a commercial a month: initially traditional and stop-motion animations, and later CG and motion graphics. Now employing nearly 80 people, the facility has since branched into feature animation, producing a string of films that have spread throughout Europe.

But Anchors Up was Qvisten's biggest challenge yet. While Elias, the brave little rescue boat who stars in the movie, has been on screen in more than 100 countries around the world, his TV assets were in need of major upgrades. Qvisten had just a year to complete its part of the CG feature. And with main producer and brand owner Animando, main distributor SF Studios and international distributor Sola Media waiting on the results, missing the deadline was not an option. 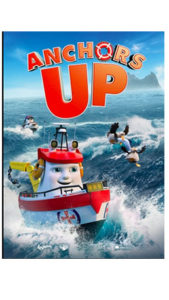 Replicating Qvisten's pipeline in the cloud

“At the beginning, we didn't think we could do it,” says Alexander Rydberg, Qvisten's IT Manager. “We always knew that things would be tough close to deadline, but by May, the number of render jobs started shooting up. We needed to double, and then triple, the size of our render farm.”

With the studio operating on a tight budget – even at peak the Anchors Up team totaled just 22 people – buying new machines wasn't an option. So Qvisten turned to the cloud, quickly identifying Azure, as the best place to rent the extra capacity. With Azure Batch, Qvisten knew they could quickly scale to hundreds of nodes, preventing artists from experiencing even a moment of avoidable downtime.

There was only one snag: Qvisten's complex custom animation pipeline. The studio uses a wide range of software in production – primarily 3D packages Maya and Houdini, the Arnold renderer, and Nuke for compositing; but also ZBrush, Photoshop, Procreate, Substance Painter, 3ds Max, Phoenix FD, and Premiere Pro – and it needed that entire pipeline replicated in the cloud.

Enter Qube! from PipelineFX, the intelligent render farm management system that Qvisten uses in production. Thanks to a recent update to 6.10, Qube! users are now able to access Azure Batch’s massive scale and power, pushing jobs to newly created nodes inside Azure Batch pools. To help Qvisten, who needed this integration before development was finished, PipelineFX created a command-line script that enabled Qvisten's artists to easily add and remove Azure nodes to and from their Qube! farm.

When submitting a job, an artist doesn't have to think about where it goes. If space is available in Qvisten's render farm, Qube! automatically routes it there; if not, it goes to the cloud. “You just launch Maya through the script, then press Submit as normal and Qube! does the rest,” says Rydberg.

Since some scenes on Anchors Up contain over 100GB of textures, Qvisten also created a disk image containing shared resources for the movie. Rather than having to re-upload the files with every job, the image was simply replicated on every cloud node before rendering began, saving time and bandwidth.

The studio has even been running fluid simulations in the cloud: an essential part of a movie whose cast consists of talking boats. With shots in a two-minute storm sequence requiring up to 400GB of RAM, transferring the work to Azure enabled Qvisten to overcome the limitations of its own in-house farm.

“Being up against deadline forced us to try new technology,” says Rydberg. “But we always work best under pressure. It helped us find the easiest and best solutions to our problems.”

Thanks to Qube! and Azure, Qvisten was able to raise the size of its render farm from 40 nodes to well over 180, enabling it to process the 5,000 frames a day needed to deliver Anchors Up on time. Better still, thanks to PipelineFX's Metered Licensing policy, which enables users to rent extra licenses of Qube! on demand, the studio was only charged for the time those extra virtual machines were actually in use, right down to the minute.

The same command-line support used by Qvisten was recently made available in Qube! 6.10, enabling other studios to try on-demand cloud rendering, with integrated support coming soon.

“I'd recommend Qube!'s Azure capabilities to any studio facing a critical crunch period where it needs to have a high output for a limited amount of time,” says Rydberg. “Cloud nodes give you a flexibility that is unbeatable. On Anchors Up, they were a real production-saver.”

About Qube!™ and Smart Farming™

Qube! is an intelligent, mature and highly scaleable render management solution that can be quickly integrated into any production workflow, and is backed by world-class technical support. Qube! delivers intelligence to production pipelines by providing business-critical insight into render pipelines, maximizing investment in rendering infrastructure and automating manual processes. Qube! works out of the box with all leading content creation applications and is truly cross-platform with all software components available on Windows®, Linux®, and Mac OS®X operating systems.

Oslo’s Qvisten Animation is Scandinavia’s biggest animation studio. Specializing in commercials, feature films and TV series, Qvisten is adept at all kinds of animated processes, from design and concept art to final execution. Its full capabilities include 2D cartoon animation, 2D cut-out and Flash animation, classical stop motion, 3D CGI, VFX and motion graphics. Qvisten was founded in 1994, and in that time has produced over 400 commercials, usually at a rate of at least one per month.
http://www.qvistenanimation.no