Los Angeles, CA – The tools that last are the ones that can roll with the punches. For Dallas, TX and Santa Monica’s Reel FX, one tool has helped them manage 4.5 million render jobs in the most efficient way possible. Now in its 11th year of use, PipelineFX’s Qube! plays the guardian role for a production queue riding high on the success of “Free Birds” and the impending release of the new Guillermo Del Toro-produced feature with 20th Century Fox, "The Book of Life".

As the backbone of Reel FX’s render farm, Qube! is used to manage and distribute the 33,000 unique weekly jobs that cycle through the firm’s production departments. Now mostly automated, the render queue behind commercials for Audi and interactive Minion clips for a Universal Studios ride has powered a mixture of 700 render nodes and individual artist workstations. The integration of all available resources with Qube!’s prioritization power has helped utilization rates remain high while artists continue to deliver on their high-profile projects.

Qube! is in the middle of every commercial, short and animated film we’ve produced,” said Ross Moshell, Head of Technology at Reel FX. “As a production studio, we squeeze every last drop out of our software. Qube! helps keep our render farm busy 24 hours a day so we rarely have downtime.”

Qube! made its Reel FX debut in 2003 while the studio was working on its first long-form animation project, GI Joe: Spy Troops. A sudden shift in demand for high-volume, quick-turnaround rendering forced the hand of the growing shop, leading them to Qube! which had already made a name for itself as an intuitive solution to their problem.

“PipelineFX was a helpful, engaging partner right from the beginning,” said Moshell. “Their blend of helpful user interface tools and powerful command-line functionality helped make our early projects successful despite having limited render-management personnel. The same customer-service values and focus on functionality are why Reel FX continues to use Qube! today.”

World-class support is a big reason Qube! is the number one render farm management software for VFX companies today. With so many custom tools and pipeline requirements to account for, a little support can go a long way to making a firm self-reliant.

“During the initial roll-out, PipelineFX would come on-site to tailor Qube! to our specific needs while we learned the basics,” said Moshell. “Over the years, we have grown to depend less and less on Qube! support, primarily because the system is so robust and stable, and because our internal render management team understands the software so well now.”

With knowledge in hand, Reel FX could focus on making the most of Qube!’s powerful features. Custom job types allow render wranglers to manage pipeline automation, media creation and other useful non-rendering tasks, saving time and company resources. When pure automation doesn’t make sense, Qube!’s versatility affords the company the ability to enable/disable machines on a smart schedule that taps the power of artist workstations that go idle at certain hours. This promotes full utilization of equipment, ensuring that priority renders are getting all the juice they need.

Looking back, the studio doesn’t know how they ever lived without a professional render farm manager.

“Before we integrated Qube!, production rendering was done with open-source solutions that offered limited functionality,” added Moshell. “Qube! has allowed Reel FX artists to focus on their work; rather than having to constantly monitor and manipulate their render jobs. They trust that Qube! is distributing the work and they always have a clear window into exactly where their jobs are in the pipeline.”

With growth on the rise and a $110 million blockbuster in their rearview, Reel FX is poised to become a big player in the animated feature world. The Book of Life, starring the vocal talents of Channing Tatum, Zoe Saldana, Ice Cube and Diego Luna, should continue that forward trajectory.

“We are in a great place right now,” said Moshell. “The staff is excited about the work, audiences are responding, and we are meeting our goals head on. Keeping on this path means that we have to maintain the hard work and good choices that got us here. We count Qube! as one of those good choices.” 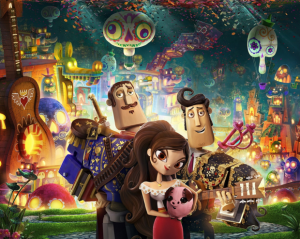