New animation production company L’Atelier Animation in Montreal is focusing their talent on a 3D animated feature film titled "Ballerina" about a young girl from Brittany in the 1880s who wants to join the Paris Opera and become a ballerina. The project has a cast of 200 characters, and involves key frame animation inspired by the real ballet dancer who is supervising the choreography.

As a young company, L’Atelier Animation also needed a new render pipeline, which has been designed by their R&D Director Dave Lajoie. It contains 7,000 cores across 500 to 600 machines and, to maintain efficiency, employs PipelineFX Qube! render farm management to make sure the team can meet the projected release date of December 2016.

Simultaneous Processeses
Over the past 20 years, Dave has worked on various types of software such as Softimage 3D, Softimage XSI, Autodesk Maya and Maya Composite, and mental ray. He also helped develop new systems at ILM to realise and animate the Jaegers and Kaijus from ‘Pacific Rim’ and Marvel Avenger character The Hulk. As Dave built the pipeline he was aware of the need to harness several different processes simultaneously, including encoding, decoding, processing media, exporting Alembic, generating hair/fur data, and batch processing. 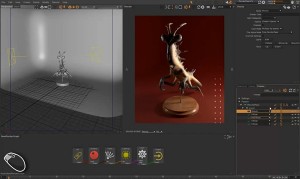 He said, “We have organized Qube! to manage all of these tasks by using its flexible API to deeply integrate it into the pipeline.” Wanting to set up a high throughput system for jobs from all types of software, he aimed to maximise all sources of the firm’s computing power. The facility runs on a combination of onsite workstations and dedicated cloud cores integrated by IT supplier Scalar Systems. The hardware is powerful but as the number of machines grows, efficiency often shrinks. Qube! was employed to offset the imbalances.

Open API
“Since we have a modest render farm size, every CPU cycle counts. Through cluster priorities, our farm maintains the right balance of resources at any given time and efficiency is implicit. But every job needs to be prioritised so if a worker is no longer needed by its cluster, it is automatically re-assigned to the highest priority in another cluster. Consequently our farm is always rendering.Our goal is to move any long processes to compute nodes, to free up our artists and let them focus on creative iterations that will translate into better quality animation on screen,” said Dave. 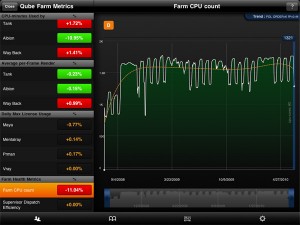 L’Atelier Animation was also looking for an open API so they could link custom applications and new products to Qube!’s smart farming system. Using python scripting, Dave successfully integrated Mercenaries Guerilla Render, their look development, lighting and rendering software, within only a few days. “Qube comes with render job templates, which we used as starting point to integrate Guerilla Render. The open access to Qube! Job types means we could inherit code from the command line classes, add our own functionality and still have a stable, tested code base,” he said.

Although a core team of 120 artists in Montreal is producing most of the work on ‘Ballerina’, L’Atelier Animation has the ability to employ artists around their network. Qube!’s supports Mac OSX, Windows and Linux so that they can be included in the pipeline fairly easily, even when they are working remotely.

L'Atelier Animation
To be effective, it was important that each job sent to the processing farm could capture the exact pipeline version at its submission time. This allows wranglers to change the version while jobs are being processed, reducing potential disruptions whenever they are updating the pipeline.

Dave values the support he has received from PipelineFX. “Having access to a qualified support team has made a lot of difference for us. This environment is always changing, and you never know what sort of problems you might face during production.” Qube!’s support can also help discover the source of problems. For example, during production L’Atelier Animation’s file server was having a issues that were difficult to identify. The Qube! logging system and support helped find what was causing the issue, and access enough data and error logs to get the problem isolated and solved.