As computer graphics have grown in prominence, rendering has become a double-edged sword for architectural designers. For firms like John McAslan + Partners conquering the time-intensive side of the process has lead them to solutions like PipelineFX’s Qube!, a professional render farm manager that has brought efficiency and speed back to their real desire: captivating visuals that will win them business.

Now in its 25th year, London’s John McAslan + Partners is a highly awarded (over 90 international design awards and counting), highly creative architecture firm specializing in the type of projects most companies only dream about. With recent designs for the redeveloped King’s Cross Station, and no less than 16 projects on site in Qatar, McAslan is sitting on a system that gets projects built. Behind this pipeline, Qube! directs their images and fly-through animations through an automated system of prioritization filters and job routing.

“We use it every day for global illumination and beauty passes,” said Luigi Mussardo, Senior 3D Animator/Technical Artist at John McAslan + Partners. “Because we need our workstations during business hours, we put Qube! to work after we leave and keep it on all night and weekend long. That power is a big reason why we don’t have to render everything in the cloud or pay others to do our animation jobs.” 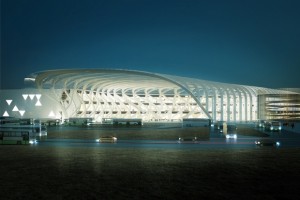 McAslan + Partners saw Qube! as a chance to make sure work was always getting done, even when no one was watching. “The process of waiting for an image to render steals time that we could be using to make improvements to our work,” added Mussardo. “So if you have a system that can’t start a job again that has failed, or redirect it to a computer that’s not being used, even more time is lost. We saw Qube! as a way to get some back.”

The default render manager for 3ds Max made render farm management too expensive in both man hours and downtime. However, the process of trying to resolve some of its issues ended up a positive, as it led to a list of must-haves for what would become their solution - the top tier being stability, then artist-friendly and customizable.

“I’m a technically minded 3D artist, but certainly not trained in programming,” continued Mussardo. “With Qube!, I was able to set the system up and then use support whenever I was unsure about my next step. They respond so quickly, it rarely feels like there is a time zone difference.” 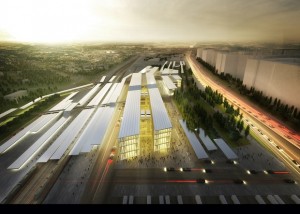 After installation, crashes became a thing of the past at McAslan + Partners, and with Qube!’s centralized approach the team has eliminated the need to re-send huge scene files to each worker every time there was a change. In the morning, when nodes are needed as workstations, Qube!’s ability to lock out certain computers from the render farm helps artists easily decide how they want their farm to behave.

As part of their deal with PipelineFX, McAslan + Partners was also one of the first companies to utilize the new “Qube! Designer” licensing option, which drops worker prices for design firms running one render job per host to $100 a year. Created to give design teams a leg up, Qube! Designer is a fully functional version of Qube! intended for designers who primarily use Autodesk 3ds Max and/or Adobe After Effects. The former, along with Chaos Group’s V-Ray, are big mainstays at McAslan + Partners, while the latter is being worked into their Qube! job types now.

“Qube! has been solid and reliable from our very first test,” said Mussardo. “And the fact that a 3D artist can manage it by himself makes it even better. It’s perfect for designers.”