When one of the UK's largest broadcasters asks you to create a series of station IDs for a major channel rebrand, you know that millions of people will be scrutinizing every frame. So how do you ensure the rendering goes without a hitch -- without the need for dedicated support staff? If you're MPC, the answer is simple: you turn to PipelineFX and its Qube! render farm management system.

During its work on the new E4 idents, MPC's motion design studio was pushing up to 30 passes a day through its Mac-based render farm. But instead of having to assign dedicated render wranglers to the project, Qube! enabled the artists to schedule and monitor all the jobs themselves. 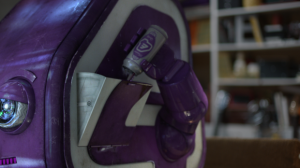 One of Channel 4's family of stations, E4, broadcasts a mixture of homegrown drama and US imports like Desperate Housewives, Scrubs and Ugly Betty. The IDs, which show Eefer, the channel's robot mascot, hiking, holidaying, or simply hanging out at home, were originally broadcast to coincide with Season 7 of The Big Bang Theory.

Trading on a mixture of the homely and the surreal -- in one, the camera pans away to reveal a tourist spray-painting the slogan 'My pants are chafing' on the side of a caravan -- the IDs required MPC to integrate their virtual character seamlessly into a series of real-world backgrounds. 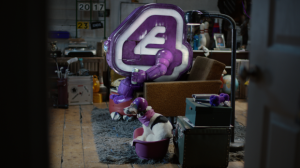 “The character designer/lead animator Rupert Cresswell wanted very much to get a photorealistic look to Eefer, and match him to the live backplates so that you could believe he was really there,” says motion design artist Melanie Keyzor. “It required some heavy 3D work.”

The effects were created in Cinema 4D and After Effects, with Keyzor conducting a series of tests to find the best way to set up renders across the motion design team's 32 render boxes.

“We ended up using Cinema 4D's physical renderer as this gave the best looking results, however the render times went from around 20 minutes with the standard renderer to 40 minutes per frame, and some were up to 2 hours,” she says. “There were five 30 second idents, so that's a lot of frames.” 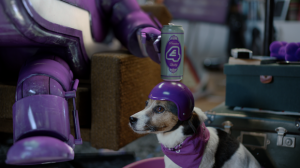 When it was first established, MPC's motion design studio relied on Cinema 4D's own built-in NET Render system for network rendering, running the jobs on the artists' own workstations. As the studio expanded with more renders being exported each day, they needed to move to a dedicated render farm to take the strain off rendering and working on an artist’s machine at the same time. They also needed to give other departments using different software the flexibility to use the farm, and themselves the opportunity to use processors in other departments rather than relying on just their local resources.

To improve workflow, the team replaced Net Render with Qube!, which could utilize available cores on their desktop even as they were working. Qube! allows the artist to render both Cinema 4D and After Effects projects under the same user interfaces. “It makes for a much better work environment,” says Keyzor. “There's much less micro-management of machines.”

Keyzor praises Qube!'s ability to simplify otherwise time-consuming technical support tasks. “At some studios, they have separate render wranglers, but because we're a department of 20, every artist is essentially a wrangler as well,” she says. “Using Qube! means that we can monitor who needs more instances and whose job needs a higher priority, and we can do that all ourselves.”

Another benefit of Qube! is its straightforward error reporting. “One of the big things we like is that if your job is failing, you know instantly,” says Keyzor. “We do have Mac support engineers, but if they aren't around, it's good to know why a job is going wrong. Qube! has a useful interface for that.”

MPC was one of the first facilities to use Qube! with Cinema 4D for large-scale production. PipelineFX worked closely with the motion design team to ensure that the experience was as trouble-free as possible, with support engineer Josh Bretag making regular visits to the studio.

“We have a very good relationship with PipelineFX,” says Keyzor. “The more we use Qube! with Cinema 4D, the more it becomes tailored to what the software needs.” 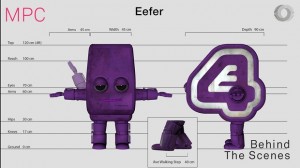 All of the team's standard plug-ins – which include such processor-intensive tools as V-Ray and multi-physics simulation framework Effex – work seamlessly with Qube!. “It's very stable,” comments Keyzor. “If a job is failing, it's usually at the artist's end.”

MPC has also recently begun to run After Effects jobs through the render farm -- again, with Qube! supporting the team's standard plug-ins more or less out of the box. “We’ve had to write a script or two to tailor the process to how our network operates,” says Keyzor. “But that's literally the only thing, and that isn't to do with the software.”

With its blend of surreal humor and everyday detail perfectly complemented by MPC's whimsical character design and photorealistic visuals, the E4 IDs served to re-establish the channel for its audience of 15 to 35-year-olds.

Since the E4 idents, MPC's motion design studio has worked on projects ranging from Adidas ads to titles for the Danny Boyle-directed comedy drama "Babylon," relying on Qube!'s powerful, artist-friendly farm-management tools to ensure that complex rendering jobs go without a hitch.

“Qube! is really easy to use, and it does just what we need,” summarizes Keyzor. “It's a very efficient way of getting renders out.”