The slithery spotted eel isn’t really swimming over you, and you’re not surrounded by a school of light blue fish. But it sure feels that way as you plunge into Expedition Reef, the new planetarium show at the California Academy of Sciences.

The San Francisco museum’s GPU-powered coral reef experience immerses viewers in a dramatic 3D video re-creation of reefs as they live, reproduce and struggle to survive in an increasingly challenging environment.

The reef teems with life — 50 species of coral, sea turtles, seaweed, algae and more than 5,000 individual fish — captured in fine detail in what the academy describes as the world’s most accurate digital reef. The film is showing daily in San Francisco until March 2019 and is being licensed to planetariums around the world.

“We wanted to bring corals to life in a way you haven’t seen in other productions,” said Ryan Wyatt, senior director of Morrison Planetarium and science visualization at the academy. “These complex ecosystems demand a highly realistic approach to help people engage with them.”

Plenty of Fish in the Sea

The film posed unprecedented challenges for the museum’s visualization studio, which relied heavily on NVIDIA Quadro GPUs, the same technology used by movie studios to create their dazzling special effects.

Making the reef and its inhabitants look real meant capturing a vast amount of detail that included everything from the reflection of light on the water to the rough texture of the coral to the gaudy colors of the tropical fish. In addition to the thousands of plants and animals, studio artists had to reproduce movement as creatures swam, swayed or floated in the ocean currents.

“We’ve produced shows with photorealistic environments before, but none have been this complex, with this much detail and variety,” said Michael Garza, the museum’s senior planetarium and production engineering manager. 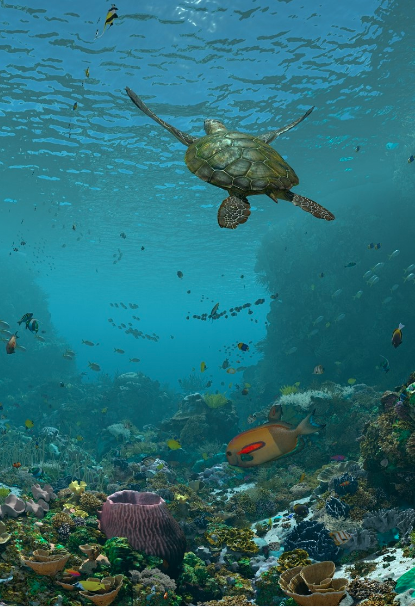 For the complete story visit https://blogs.nvidia.com/blog/2018/03/22/coral-reef-californiaacademy/