"Birdman" was the big winner at the Oscars yesterday — and there's a Montreal connection to the film.  The movie took home four Oscars — including the coveted Best Picture award — with the help of Montreal-based visual effects company Rodeo FX.

Alejandro González Iñárritu’s Birdman is the story of Riggan Thomson (Michael Keaton) playing a Hollywood actor past his prime - once famous for the superhero Birdman but now trying to kickstart his career as a Broadway producer and thespian. The film is presented in one seemingly long continuous take, thanks to the efforts of Gravity cinematographer Emmanuel ‘Chivo’ Lubezki, who also helps illuminate Riggan’s complex relationship with his alter ego during several hallucinatory events. Whilst certainly not a large scale visual effects film, Birdman features numerous seamless invisible shots, including the long takes and the odd events that happen around Riggan. Helping to bring those to the screen was Montreal studio Rodeo FX headed by President Sebastien Moreau. We find out how some of the key shots were achieved from visual effects supervisor Ara Khanikian. 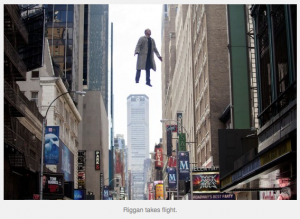 The shot: In perhaps one of the most elaborate effects in the film, Riggan re-imagines himself as his alter ego Birdman and levitates above the streets of New York before taking flight around the city.

The effects: The flying sequence was heavily previs’d, with background plates and HDRs shot to match. The initial levitation was captured with an on-set wire rig lift. Keaton was later filmed against greenscreen and lit with LED light panels - similar to the technique Lubezki had used on Gravity - featuring HDR imagery of the locations, with final shots completed by Rodeo.

Halon completed previs for the flying shots, while Rodeo also contributing techvis passes to help with planning both the New York background plate camera moves and how Keaton would later be acquired on stage in Montreal. “We didn’t have access to motion control or repeatable heads of any sort,” says Khanikian, “so we really had to find creative ways of shooting him and getting technically what we needed. We did the techvis to show where the camera had to start and make sure it matched with what was shot months ago in New York.” 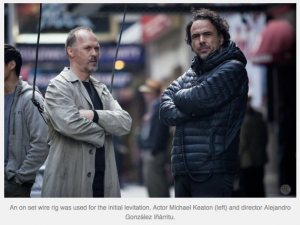 “For those kinds of shots,” adds Khanikian, “most of the time the most difficult thing is to nail the lighting, and this process really assured us that at least the lighting is going to match. So when Riggan goes inside or outside of the building or in the light or the shadow, he reacted properly to those cues.” 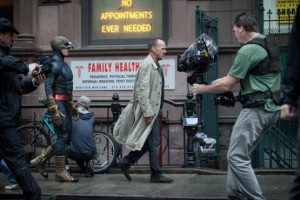 The shot: Hallucinating, Riggan meets Birdman while strolling down the street.

The effects: The scene was played with Keaton walking on a New York street followed by a stuntman dressed in a Birdman suit created by Spectral Motion. Rodeo then augmented the suit, added CG wings and feathers and also grafted Keaton’s face onto the stuntman’s.

The shot: Now imagining the world of Birdman, Riggan conjures up an attack on the city featuring a strange winged creature, helicopters and stray missiles.

The effects: These were added as CG elements into live action plates by Rodeo.

An initial missile hit on a jeep was made up of a practical on-set element featuring a vehicle rigged to rise up and have fire blasting through the windows. Rodeo sim’d the missile and trail in Houdini and then enhanced the explosion with practical fire and debris elements.

The helicopters and additional explosions and missiles were also digital elements. “As we pan up we see the tail of another explosion at the top of the building,” describes Khanikian. “At that point it was just a puff of smoke they had shot for timing, so we did a full sim in Houdini of that building with proper sim’d elements like bricks and plywood and glass falling off. We also had to do a lot of heavy smoke sims and practical fire elements in comp.”

Rodeo relied on Softimage XSI for the creature, and ICE for the feather dynamics. “There was also a lot of little details like dripping saliva and a heatwave coming out of its beak,” notes Khanikian. “And when it was leaning on the side of the building we had a lot of simulated destruction for the pieces that fell down.” 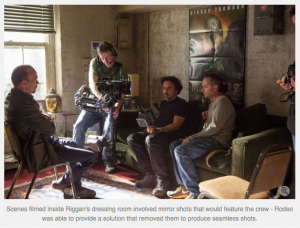 The shot: In several long takes, Riggan is seen contemplating his fate in front of his dressing room mirror, or talking to other characters as the camera moves around them.

The effects: Despite the camera move, no camera or crew are seen in the reflection, since Rodeo rotoscoped out the actors and developed a two-and-a-half-D solution for the reflected environment.

“Every time you’re in the dressing room or anywhere with mirrors, we actually built 2.5D DMP environment of those places,” says Khanikian. “Most of what you see in the mirrors is a matte painting of the environment. The only thing we kept from the plates for those were the rotoscoped foreground actors and their reflections.”

What helps sell the seamless shots are the streaks, smudges and light effects of the mirror. “For that built a little recipe in comp to extract all of those dirt elements,” states Khanikian. “We had some shots where we could clearly see them and we had good extraction of them. In comp we had a little gizmo that would bring back all these dirts in the mirrors, and then just dial them in.”

The shot: Rodeo’s skills were utilized in several other scenes in the film, including key shots of comets entering the Earth’s atmosphere, shots of Riggan trashing his dressing room, various New York environments and in helping to piece together the ‘endless’ takes of the film.

The effects: The comet shots - ultimately representing a falling star - were CG Houdini sims added to live action background plates. “We looked at the Russian comet footage for how the dynamics in it worked,” says Khanikian. “What the director really wanted for those shots was that it was very lively and flickering and sometimes bits of it drift off. In the downtown shot for the comet, in particular, he really wanted to have the comet disintegrating, whereas the other ones are seeing a massive comet through the clouds passing by.” 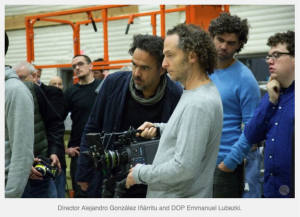 Rodeo also crafted around 100 stitches to complement the 'endless' takes and seamless transitions. One transition in particular - involving a view towards a skyscraper at night that time lapses to the next day - was a two and a half-D matte painting. “When Edward Norton looks up and exhales his cigarette smoke,” explains Khanikian, “we transition to a fully digital background and do a digital timelapse. As the timelapse finishes the camera goes down to almost street level and enters Riggan's room through a CG window grate.”