Rachit Singh, Head of Technology at Atomic Cartoons, explains how Qube! and Python helped with the work needed for the Netflix show, Beat Bugs.

For a series that has been in production for one and a half years, Beat Bugs has been a catalyst for tremendous change at Atomic Cartoons. The Netflix show - based on the premise of all-singing, all-dancing bugs and featuring popular songs by The Beatles - had some tight deadlines, which is no surprise when you consider that the entire show was created as one and then later on was split into two seasons that debuted merely months apart from one another.

It was up to Rachit to solve the problem of speed, alongside a team of pipeline TDs and supervisors who needed 100,000 frames rendered. "The Beat Bugs schedule was definitely pretty aggressive in terms of time constraints, just because they needed to get all the seasons done by a specific date," he explains.

"We pretty much had to work across all the departments and the whole pipeline just to make sure we could hit those deadlines"       -Rachit Singh, Atomic Cartoons

That wasn't all, though - during work on Beat Bugs, Singh found a roadblock in Atomic's renderer. "Mental Ray is not a very efficient renderer, so to get around some stuff we had to crank up some settings." Singh mentions that this was due to render artifacts appearing, but luckily their render farm manager Qube! came to the rescue. 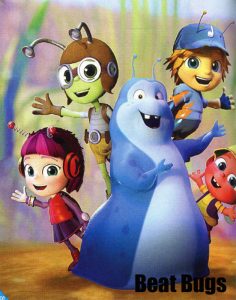