A piece of "Game of Thrones" from Swabia, the region where Mackevision is headquartered featured in Now Magazine.

Interview by Leonie Sanke. The original is published in German, so this is the interview translated into English. 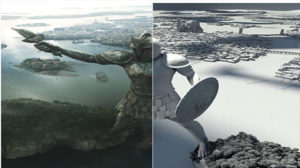 In the "Titan of Braavos" are several months of development and animation time. Photo: Mackevision

Since the fourth season, the Stuttgart-based company Mackevision has been one of the digital studios that make the special effects of Westeros so special to the fans of "Game of Thrones". Jörn Grosshans, Visual Effects Supervisor at Mackevision, tells in an interview how long and challenging this work is and why he cannot enjoy the show anymore. The seventh season of "Game of Thrones" is currently running at Sky.

Now: In your work you can see excerpts of the world's most successful series of all time - long before it can get something to the public. How difficult it is for you to keep your knowledge for yourself?

Grosshans: My friends and acquaintances know that they do not ask me better if I have a lot to do with it and that I am not allowed to say anything. I watch the season always after my vacation, I always need a little distance.

Now: How much do you know about the action when you get the order?

Grosshans: We used to know more, as we have still got the slides sent. Over the relays, however, more and more was kept secret to avoid spoilers. In the meantime, we only see the sequences we are working on.

Now: Are you a fan of "Game of Thrones"?

Grosshans: I like the series. If you work on it, you look at it with quite different eyes. You cannot enjoy it like a regular viewer, because you always see if everything has become well and what the other companies have done. Besides, the surprise is often missing. But I am happy, of course, if a season has success.

Now: Would you have thought at first that there would be such a hype?

Grosshans: When I first worked for the show, I did not even know it. I then watched the first season and found it quite cool. I would not have thought that she would be so successful worldwide. It was brave by HBO to invest so much money into such a niche.

Now: What is the biggest challenge when working on "Game of Thrones"?

Grosshans: The timing. In movies, you have more time than a series, because there is still much to change until the end. You work on it, although the series is already aired. We are still sitting on a few settings for the seventh episode - and the first episode is already running. At the same time, the production has cinema-level. We have many water shots that will take very long time. In the current season, we also created some mass scenes completely digital. On the scale we have not done this before.

Now: How long does it take until such a shot is finished?

Grosshans: For example, we did the opener with the "Titan of Braavos" in the fourth season. About ten seconds, four people worked for three months. Specialists have created each element individually - from the surface structure of the statue to the simulation of the ship's wing. Only at the end is everything put together in one picture.

Now: Such data is probably not sent by e-mail.

Grosshans: Right, these are some terabytes. Every drop of water in a sea battle is stored somewhere. Due to these data masses, the rendering (ie the playing out as a finished image), takes a long time. A frame takes about three hours - and a second has 24 frames. So a second render can take three days. And in the first version it does not usually remain - there is also a lot of patience.

Now: Which "Game of Thrones" animation from Stuttgart are you especially proud of?

Grosshans: On our "Titan of Braavos", for which we received the Visual Effects Society Award. With the season we also won an Emmy.

Now: The customers of your digital studios are mainly from the automotive industry. What is more fun: Auto-animations for Daimler or visual effects for Westeros?

Grosshans: The beauty is that we can do both - the team is the same for both tasks. We are, of course, given more publicity through "Game of Thrones".

The original article you can find here: http://www.jetzt.de/glotzen/ein-stueck-game-of-thrones-aus-schwaben