Deluxe’s Method Studios served as a primary VFX vendor for Marvel’s new Guardians of the Galaxy Vol. 2 film, having completed work on more than 500 shots, including the final closeup on Rocket. Set to the backdrop of Awesome Mixtape #2, the film continues the adventures of Peter Quill, Gamora, Drax, Groot and Rocket as they unravel the mystery of Peter’s true parentage. 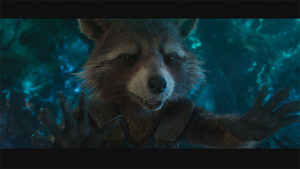 In keeping with the visual spectacle of the first installment, director James Gunn and VFX supervisor Chris Townsend returned to Deluxe’s Method Studios, this time to create hero characters Rocket and Baby Groot for several key sequences, and to handle a broad scope of work that included large-scale destruction and spaceship crashes, full CG animation and environment design, and the feature’s final scene. Method’s VFX supervisor Nordin Rahhali led a team of more than 250 artists on the project.

“Guardians of the Galaxy Vol. 2 was the most challenging project I’ve been a part of, and the end result was also the most rewarding,” says Rahhali. “It's not often that a body of work includes such a fun mixture of elements to create; from fantastic worlds filled with alien scenery and plant life, to epic space ship crashes and giant energy tentacles, to believable performances from Rocket and Baby Groot that draw on your heartstrings and emotions. With such a wide range of work to tackle, James and Chris were very open to our ideas which made for a strong creative collaboration.”